What is the meaning of vietnam

Find out about the history of Vietnam name meaning and discover how Vietnam got its name. The name of `Vietnam’ before it become Vietnam has signified not so much a country as a brutal jungle war or a spectacular failure of American power. In recent years, however, the boom in traveling to Vietnam, have enabled more contemporary and relevant portraits of the country to gain its name in the West. An understanding of history still goes a long way in Vietnam, since the country has a unique civilization and a highly cultured people, but nobody needs to swot to be entranced by the sublime scenery, the delicious cuisine and the opportunity to witness the invigorating, early days of Vietnam’s renewed contact with the West.

Facts at a Glance

Religion: Buddhism is the principal religion but there are also sizeable Taoist, Confucian, Hoa Hao, Caodaists, Muslim and Christian minorities

What does actually Vietnam means?

Name of Vietnam before it became ‘Vietnam’: Meaning of Viet nam which must be spelled as Viet Nam abbreviated for the land of the Viet peoples. Nam means south and to make it short, meaning of Vietnam is Viet people living in the South. Many of us refer to Viet Nam because of its long bloody war in the past decades with America and can hardly know what does Vietnam means. Anyway, the modern day Vietnam has forgotten the war and live peacefully in a country of more than 95 million peoples.

Back in the history, the name Vietnam came out when the legendary Emperor Gia Long decided to rename the nations name to Nam Viet which was originally inspired from the names of the different regions in Vietnam which later has changed to Vietnam as we call it today. 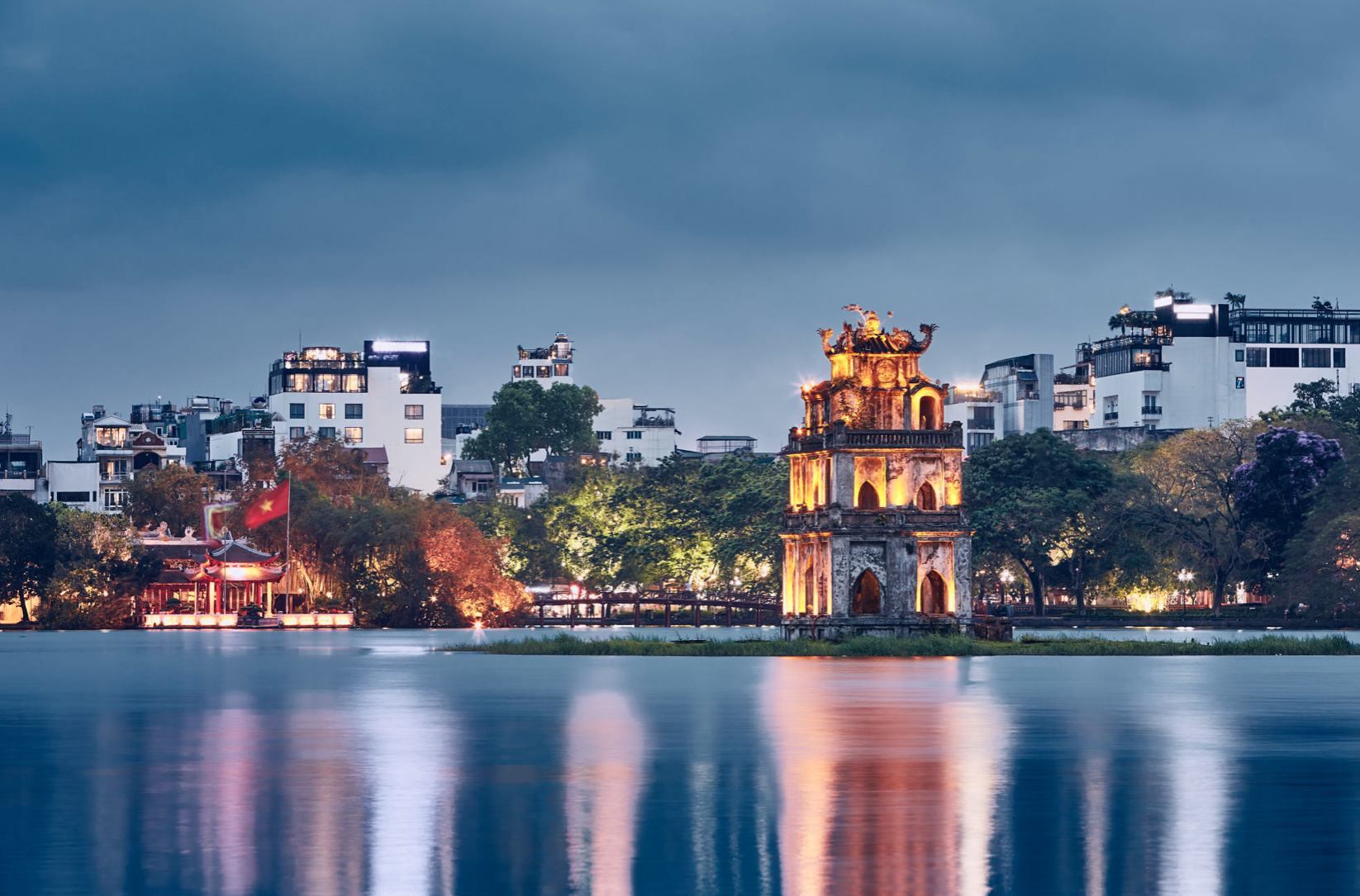 Vietnam borders Cambodia, Laos and China and stretches over 1600 km along the eastern coast of the Indochinese Peninsula. The country’s two main cultivated areas are the Red River Delta (15,000 sq km) in the north and the Mekong Delta (60,000 sq km) in the south. Three-quarters of the country is mountainous and hilly; the highest peak is the 3143-metre-high Fansipan in north-west Vietnam. Vietnam is made up of equatorial lowlands, high, temperate plateaus and alpine peaks. Although Vietnam’s wildlife is rich, it is in precipitous decline because of the destruction of habitats and illegal hunting. Less than 20% of the country remains forested, and what remains is under threat from slash and burn agriculture and excessive harvesting. Fauna includes elephants, rhinoceros, tiger, leopard, black bear, snub-nosed monkey, crocodile and turtle.

>Vietnam has five national parks: Cat Ba, Ba Be Lake and Cuc Phuong national parks in the north; Bach Ma National Park in the centre; and Nam Cat Tien National Park in the south. In an attempt to prevent an ecological and hydrological catastrophe, the government has plans to set aside tens of thousands of sq km of forest and to create 87 national parks and nature reserves. Although Vietnam lies in the intertropical zone, local conditions vary from frosty winter in the far northern hills to the year-round subequatorial warmth of the Mekong Delta. At sea level, the mean annual temperature is about 27 degrees C in the south, falling to about 21 degrees C in the far north.

The Names of Vietnam in History from the 1st to the 6th centuries, the south of what is now Vietnam was part of the Indianised kingdom of Funan. The Hindu kingdom of Champa appeared around present-day Danang in the late 2nd century and had spread south to what is now Nha Trang by the 8th century. The Chinese conquered the Red River Delta in the 2nd century and their 1000-year rule, marked by tenacious Vietnamese resistance and repeated rebellions, ended in 938 AD when Ngo Quyen vanquished the Chinese armies at the Bach Dang River.

During the next few centuries, Vietnam repulsed repeated invasions by China, and expanded its borders southwards from the Red River Delta, populating much of the Mekong Delta. In 1858, French and Spanish-led forces stormed Danang after several missionaries had been killed. A year later, Ho Chi Minh City (formerly Saigon) was seized. By 1867, France had conquered all of southern Vietnam, which became the French colony of Cochin-China.

Communist guerillas under the leadership of Ho Chi Minh resisted French domination. Ho Chi Minh’s declaration of Vietnamese independence after WW II sparked violent confrontations with the French, culminating in the French military defeat at Dien Bien Phu in 1954. The Geneva Accords of 1954 temporarily divided Vietnam into two zones (the Communist north and the anti-Communist, US-supported south). Political and ideological opposition quickly turned to armed struggle, prompting the USA and other countries to commit combat troops in 1965. The Paris Peace Agreements, signed in 1973, provided an immediate cease-fire and signalled the withdrawal of US troops. Saigon eventually capitulated to the Communist forces on 30 April 1975.

The end of the Cold War and the collapse of the USSR in 1991 caused Vietnam and Western nations to seek rapprochement. In July 1995 even intransigent America re-established diplomatic relations with Hanoi.

Four great philosophies and religions have shaped the spiritual life of the Vietnamese people based on the Vietnam name meaning. Confucianism, Taoism, Buddhism and Christianity. Over the centuries, Confucianism, Taoism and Buddhism have melded with popular Chinese beliefs and ancient Vietnamese animism to form what is known as Tam Giao (or `Triple Religion’). The Vietnamese peoples and their language (kinh) is a hybrid of Mon-Khmer, Tai and Chinese elements with many of its basic words derived from the monotonic Mon-Khmer languages. The most widely spoken foreign languages in Vietnam are Chinese (Cantonese and Mandarin), English, French and Russian, more or less in that order.

Vietnamese cuisine is especially varied – there are said to be nearly 500 different traditional dishes, ranging from exotic meats such as bat, cobra and pangolin to fantastic vegetarian creations (often prepared to replicate meat and fish dishes). However, the staple of Vietnamese cuisine is plain white rice dressed up with a plethora of vegetables, meat, fish, spices and sauces. Spring rolls and steamed rice pancakes are popular snacks, and the ubiquitous soups include eel and vermicelli, shredded chicken and bitter soups. Some of the more unusual fruits available include green dragon fruit, jujube, khaki, longan, mangosteen, pomelo, three-seed cherry and water apple. Vietnamese coffee is excellent.

[/vc_column_text][vc_empty_space][vc_column_text]Special prayers are held at Vietnamese and Chinese pagodas on days when the moon is either full or the merest sliver. Many Buddhists eat only vegetarian food on these days. Some of the major religious festivals follow a lunar calendar. They include: Tet Vietnam (late Jan-early Feb), the most important festival of the year, marking the new lunar year as well as the advent of spring; Wandering Souls Day (August), the second-largest festival of the year, when offerings of food and gifts are given to the wandering souls of the forgotten dead; and Holiday of the Dead (April), which commemorates deceased relatives.

Vietnam means” (in Vietnamese it is written with two words: Viet Nam) for only about 200 years. The first national name, Van Lang, was put by the ethnic group of the hung, or lac, inventors of the technique of rice cultivation by flood and the bronze drums where part of the history and legacy of Vietnam were recorded.

After them the au, or tay au arrived from China. The two towns merged and became a new kingdom of Au Lac. Then another groups which named viets, or yues, an ethnic group that migrated from the coast of China about 2,500 years ago. After them other groups arrived in a long march towards the south and to the Indochina, a migratory movement from the north that would last for more than fifteen centuries.

The term “Vietnam” appears for the first time when Emperor Gia Long decided, at the beginning of the 19th century, to rename the country as Nam Viet. In order for the Chinese emperor to approve the new name, he sent an ambassador to China, which requested the reunification of the former territories of An Nam with the new territories of Viet I’huong, as well as his permission to change the name of An Nam for that of Nam Viet.

After consulting with the members of the court, the Chinese emperor decided that the name was too reminiscent of the ancient kingdom of Nam Viet Dong, which had included two Chinese provinces. The name proposed by Emperor Gia Long could lead to confusion or even hide territorial aspirations.

The problem was solved simply by inverting the order of the two words that composed Nam Viet: the people (viet) of the south (nam). Vietnam received different names during its long history of invasions. Marco Polo circumvented the coast of Vietnam in 1292. In his texts appears the name of Caugigu.

The Malays transformed this name into Kutchi, and later the Japanese into Kotchi. In turn, the Portuguese called it Cauchi Chine to differentiate it from the city of Cauchi or Kutchi, in India. This name was recovered by the French colonizers, who called the South of Vietnam Cochinchina.